Is there a problem with Windows Update Policy? For months critical updates have not been deploying to computers via the policy.
They deploy when I manually deploy them though Syncro. 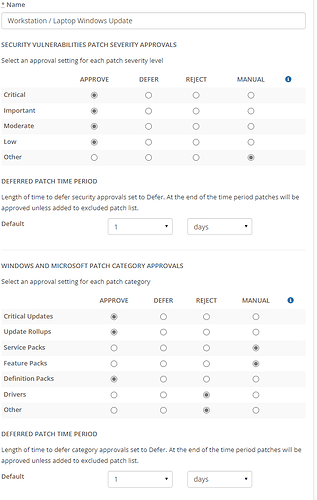 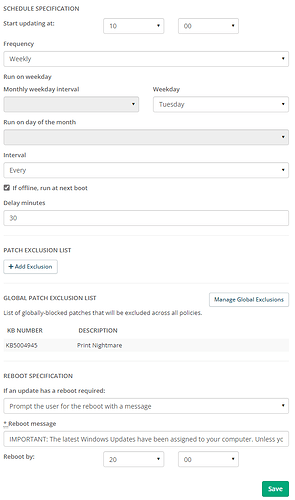 Here is the policy. I’ve been playing it with.
It could be all MS updates, not just Critical ones but I know Critical is affected.
Hopefully I have done something wrong in the policy.

I’d reach out to support. I don’t believe there are any known issues with Windows Patching currently.

Thanks, I will do that now

This has been an issue for the last few years, I’ve even had other RMM providers use this as a reason to try and get us to move.

This is not the case. We did a major overhaul to our Windows Patching system toward the end of Q1 2022, effectively rewriting the bulk of it from scratch. There aren’t currently any known issues with patching, or any of the functionality we’ve added like blocking patches by KB (per policy or globally), or the new deferment mechanics.

If you are experiencing any issues today I’d reach out to support to get that sorted.

I’ve not seen any updates appear on our portal mentioning this, although there is a chance I have mis read it! I will say the only reason we haven’t raised a support ticket so far relating to this is because we have heard the same thing from many sources, including competitors as mentioned, so assumed you guys were fully aware.

Well we see competitors mentioning all sorts of things. If you take a look at their comparison pages you’ll see all sorts of crazy stuff, like Syncro not offering ticketing at all being one example.

Most competitors have outdated information that goes hand in hand with their outdated pricing models :). When you take enough business away from any given competitor, this is often (sadly) the output that results from that.

At any rate, if you are seeing any issues there, please do reach out to support and they’ll get you sorted.

I have no issues with our patching. I haven’t seen any widespread complaints either. Other RMMs make significant changes to WU and have known to break WU. I’ve had to undo what CWA and Kaseya changed when I migrated. “Competitors” will always paint a picture to try and sell their products, so I wouldn’t use them as a source. A lot of RMMs struggle on patching because of the limitations MS keeps putting on what can be done. Feature Updates, for example, have no silent switches, so those have to be scripted with Update Assistant. Windows Home can’t be managed the same way Pro can. Also, up until early last year, I believe, the SSU updates were separate. If those get behind, patching may stop. It’s now included in the monthly, but needs to be caught up to avoid any issues. Syncro | OS Patch Management - Major Feature Update

Oh don’t get me wrong if I was listening to competitors I wouldn’t still be using Syncro, it was more a coincidence that I noticed it whilst struggling to make updates automatic, which they are in part. I wasn’t aware of the SSU update bit though, so I will investigate this, thanks for clarification.

When we were with Kaseya, our partner had us deny a bad patch. For months, we thought we were good on patching. No patches were showing as missing. When we switched to CW, we had tons of missing patches that failed to install. After tracing it, the denied patch was required for all future patches. So we had to install that patch in order for patching to resume. After that, I always try and look for the weird if I come across something not patching. Generally though, as long as the Feature Updates are current, we’ve had no issues. 21H2 or 22H2 is where we try and run at.

We are not seeing any problems with the Windows Patching feature.
I even have it set to install Drivers as well. (though close to 100% of our customers are on HP)
No problems I am aware of, that can be stuck to SyncroMSP. [1]
Quite happy on this front.

[1] Microsoft broke six Win 11 PCs that we look after over Xmas due to a bad patch, but that isn’t Syncro’s fault.

Following because I too have come across PC’s missing feature updates. I’ve been manually checking for updates here and there and they will start downloading then, just not automatically like they’re supposed to.

If you are referring to updates like 21H2 and the like, those won’t be automatically updated. You can script them, but an RMM can’t install them natively because there is no way to automatically accept the EULA.

Happen to have the script handy?

This is what I use.

Jimmie’s should be good, and I believe there are some in our Community Script Library as well.

Thanks you two. I will give that a try.

Thanks for the replies. Support believe the issue is I have the “Other” category set as Manual.
I’ve made the change and I will find out if the problem is fixed on the next patch release of updates.