The folks over at n8n (https://n8n.io/) reached out to me as they are preparing to start work on a node for Syncro. If you’re not familiar with n8n, you should check it out. It’s like Zapier, but better, and can be self-hosted. I provided them with some feedback on what functionality I’d like to see in the node based on how I use the Syncro API currently. A node is basically just an official integration that allows n8n to more easily talk to the Syncro API without having to write code. But I’m also happy to relay any other suggestions than what I sent over. They are essentially looking for guidance on which endpoints they should focus on first. I suggested RMM Alert, Contact, Customer and Ticket. For each one, I provided a use case so they could understand the need. I would ask that you do the same if you wish to provide feedback. I’ll take all the suggestions and relay them to n8n directly. Cheers.

Can you expand on what sort of interactions you would use n8n for? I’d like to understand this better, as it looks like it is pretty flexible.

Here’s what I’m currently using it to do:

Those are a few examples.

Hi moez, I am interested in expanding on invoicing integrations with other vendors in order to automate account provisioning and licensing sync to Syncro Recurring Invoices. Two integrations that I would like to see in particular are Bitdefender (to expand on Syncro’s lackluster integration with them) and Keeper Security (a fantastic password manager). Do you think those sorts of integrations are in their scope?

I would say probably not. What n8n is focused on right now is simply making it easier to tap into the Syncro API without having to write any code. To do what you are asking, they would also need to tap into BitDefender and Keep Security’s APIs, which certainly isn’t in the scope of what they are trying to accomplish now.

Thank you - that gives me some food for thought.

Looks a lot like Integromat. My main question will be if it will handle more triggers than the current Zapier/Integromat options? Currently, there are only options to start actions based on customer creation, invoice creation, payment creation, and a few others. We are looking to start actions from updates/edits to Recurring Schedules, Refurbs, and more. There are so many missing actions in the current Zapier automation; another doing the same thing?

So the short answer is maybe. The biggest thing with n8n that separates it from Zapier and maybe Integromat (haven’t used it in a while) is that it can work with anything that has an API. What n8n is doing now is creating a node to make it easier to tap into the Syncro API. But you’re not limited by what they program into the node, it just means you have to work with the API directly. Sure, you could also ask them to implement more functionality into the node and I would suggest reaching out to my contact directly with exactly that feedback. But to go back to your question, you can 100% do what you want around customer creation, invoice creation and payment creation in two ways. You can setup Syncro to send the data to n8n webhook via notifications (created customer, created invoice and created payment are all currently supported as a notification by Syncro). The other way is to have n8n query the relevant API every so often and grab all the invoices/payments/customers and act on something when there is something new. That’s much more complex, obviously.

Really though, it comes down to what Syncro supports more than anything. If you are wanting to grab something from Syncro and it’s not pushed via a notification or supported via the API (SyncroMSP API Docs) then you’re SOL. n8n can’t talk to something that doesn’t exist.

Sorry, I realize I used examples that Zapier already does. But in terms of recurring schedules, that is a notification that Syncro supports so you could point that to an n8n webhook and do whatever you want with it. Can’t speak to refurbs, exactly. But if the event is here https://admin.syncromsp.com/notification_rules/new then it should be doable.

Let me clarify the struggle of the current status of the API: there’s a lot of nodes and triggers missing - especially in the notification center.

There are no triggers related to “Recurring Invoice Schedules“, or at least not the creation/edit/deletion of any /schedule/. The notification center only has triggers available for when an invoice was created from a recurring schedule.

There are also no API references or notification rules to trigger new/edit/delete of any of the following: Refurbs, Customer Purchases, Logistics, and more. Neither Zapier or Integromat have these action points.

I’ve had multiple developers contracted for dozens of hours working to no avail - attempting to create a “listening engine” for [changes made on the API] using global administrator privileged API Tokens.

The closest I’ve been able to create is a heads up display dashboard GUI, similar to the Tickets dashboard.

Looking around how the user app works - there is a sort of push-interface for actions and notifications in the web page functions.

It is not part of “the api” but rather how the web-page works on the backend.
I mentioned it more over here

Is it actually though? For example, from the Zapier Syncro pages Notes The New Invoice trigger actually has a five minute delay to attempt to compensate for the fact that we don’t know when an invoice is “done being edited.” We think on average that’s how long it takes before people are done editing line items. Note: Currently Zapier doesn’t support custom ticket fields when using a trigger to create a new ticket. That doesn’t actually sound like they are getting a Webhook - per se. For …

I saw most of these (including some API Endpoints that are not listed in the API Docs) with the Network pane in Edge / Chrome / FireFox. A write up is here

Where is the report’s data??-SysManSquad | Systems Management Squad

Have you ever looked at a report on a Portal Page and wanted to know just WHERE the data just came from? Well you can - and finding the information can be so easy. Read on below to see how. Introduction Take for example this report on a Proactive...

Though that example is aimed at pulling data from reports in Azure Portal or similar, you could apply the same techniques.

For example, when you edit a script, and hit Update, it sends the contents to https://{YourInstance}.syncromsp.com/scripts/{ScriptID} 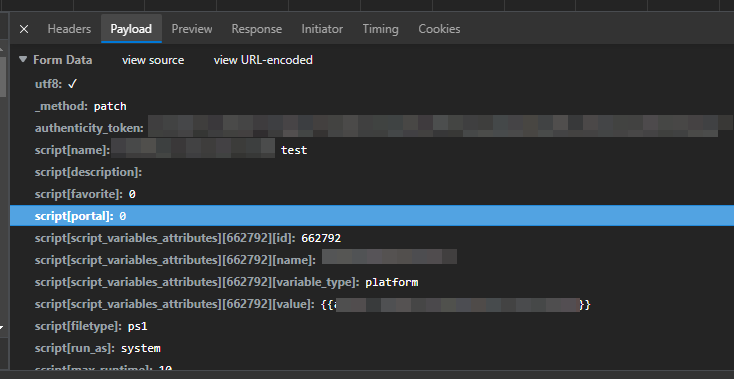 But that isn’t documented in the API Docs

I’d love to get a full Stripe integration (to include ACH).