So we are seeing this issue on most of our systems, the system tray icon gets generated over and over again(assuming after a crash) and fills it up entirely. We can’t seem to track down the issue. Not seeing any crashing in the event viewer.

Just started with the software and this is already putting us off.

Has anyone seen this? 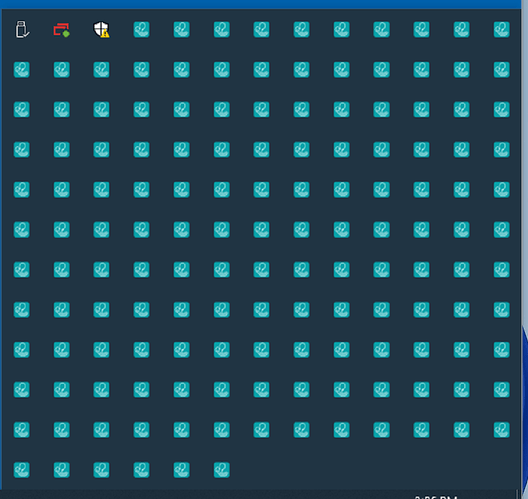 I’ve not personally seen this with Syncro, but I’ve def seen it with other applications over time. I find it super strange there would be nothing in the event logs or Syncro logs that indicate a crash.

I have 1 runtimebroker crash in the past week. No other apps have crashed. I see some indicating syncro starting live service and overmind but nothing about stopping.

Is there something else I can look at outside of Event Viewer?

Syncro’s logs are in C:\ProgramData\Syncro\Logs. And no this is definitely not normal. I’ve only seen it a few times, typically on machines that haven’t rebooted in a very long time and even then only a few not dozens. My guess is you may have some security solution or other system modification that is interfering with Syncro starting properly or updating. You may need to start a ticket with support.

Hi @CSIT, I just checked with the team and they confirmed that something is probably killing the Syncro app runner and then the service is restarting it, the app getting killed abruptly is causing the icon pilage.

Yes, I can see that the app runner is crashing but what in the world could be causing it to crash?

I’d be willing to bet it’s this. SRP can be real finicky with certain things. In my experience, always requires some additional tweaking for certain apps.

Disable it on one device, update GPO, and see if the issue persists is what I’d do IMO.

But no SRP violations in EV? The full Program Files/(86) folders allowed all exe’s. No dll blocks etc.

This would be a first for me.

Yea I mean, I’m just trying to help troubleshoot without being in your environment. If any part of Syncro is calling something outside of your allowed list/directory, it could be conflicting.

I could also just be wrong lol, but that’s why I would test the theory on one device and see if it stops happening since you said it’s happening on what seems to be all of them, or most. Something somewhere has to be conflicting and I can’t imagine it being Defender in this case.

I don’t see that being the issue. Nothing in the logs indicate calls to any undocumented path. Regardless, Syncro would be running with System level privileges right? We allow admin bypass for SRP.

I’ll give it a try regardless though. Thanks for your help!

yes, I’ve seen this occassionally. (3 or 4 times in 6 months on different machines)
Not had time to investigate though.

I see it fairly often. We have about 120 devices and I see it on almost every computer I work on. My machine is showing 4 now and I rebooted yesterday. I can’t say I have ever seen as many as the post above. Or worried about it enough to take the time to investigate. But I would like to solve it eventually.

I have seen this occasionally but it’s very common on old OSes like server 2008 and windows 7. Yes I know, super old but they are kept for legacy reasons and have all but few been phased out.

I’ve seen this on a couple Windows 10 machines in the recent weeks.

We see this once in a blue moon. Typically on older machines.

It would be a good Syncro monitor to catch these restarts and report them back to the portal.