I checked my asset updates today for the first time in a while. I have a pending critical update for most of our assets. KB5016627. It was released on Monday.

I have our Windows patch settings set to wait 2 days and install on Thursday nights. I’ve attached a screenshot of our settings and a screenshot of the pending patch. Any idea why this didn’t install last night? 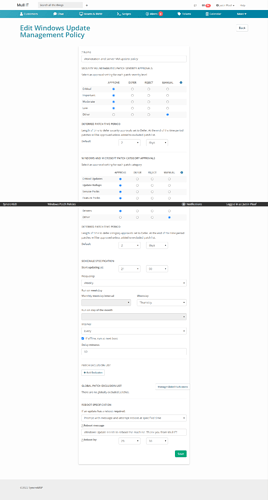 I’d write into support to confirm, but please note that the deferral period isn’t related to when the patch is released from Microsoft, it’s from the time each individual asset first sees it (and Syncro scans it). Those gets scanned for daily, so if an asset was offline or scanned on Monday prior to Microsoft releasing it, and then found it Tuesday, depending on when it was detected Tuesday it may not have triggered the install on Thursday depending when 48 hours was up according to the install policy on the schedule.

Not sure if this is the same issue but I’ve noticed that some updates labeled ‘Critical’ would only install if I had the ‘Other’ category also approved as well.

You are not wrong, but it defies logic and is very frustrating, especially since there is no documentation outlining how to install only Critical updates without getting less important ones when selecting Other for auto-approval.

Was this reported to their Support? Other is supposed to be strictly for updates that MS doesn’t properly classify.

I do not have other on auto, and I am not seeing this behavior of patches not installing that are critical. I had one issue a couple weeks back where a patch didn’t auto install, and while a Google search made it seem as though it was listed as critical, I did my own Windows Update API call, and sure enough, the patch was not classified by MS properly, it had no category, and so Syncro properly through it in other, it’s like a catch all.

Was this reported to their Support?

If their support means Syncro support, then yes it was.

KB5016616 appears in Syncro in the Windows patches list with a category value of Critical Updates and has not installed despite that category being set to auto-install. There was a similar update last month.