Can someone help clarify these two items (attached) for me? I thought “Feature Packs” were “Feature Updates”, but I’m assuming not given the statement that the new update does not push Feature Updates? 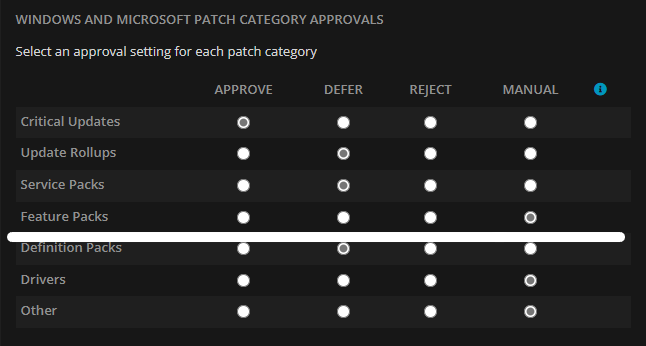 To piggyback off @mgiordano answer, MS does not provide silent or EULA acceptance switches on the feature updates, so it can’t be pushed. Have to script the update assistant.

The problem of feature updates looks like it reduce over time.
Microsoft is moving to a 3 year release, instead of the 6 month or 12 month release.

How come our RMM can push Feature Updates?

For the love of god did you not read anything else in this post, or did you come to drop that line sarcastically because another RMM gave you a fancy button to do it lol? Because it’s not part of standard Windows Updates and so it’s simply not a “feature” that Syncro spent time doing.

Is it really that big of a deal to just grab one of many scripts out there that does it, save it, and “push the button” when you want it done? lol

which is why no RMM pushes Feature Updates by default.

For the love of god did you not read your own post. lol

For the love of god did you not read your own post. lol

Apparently reading comprehension is not your strong suit. By default meaning relevant to the discussion of this thread which was a clarification on why Feature Updates are not part of Windows Updates. But nice try. Keep complaining about not having a button.

While I don’t want to get into the argument of why it is there or not. I think for the most part what they are really asking for is a way to detect that XX feature update is missing and to have a script ready to deploy it for easy one click action is the main request. While it is something you can add manually (a script to find missing feature updates and then either alert or auto deploy the update), its just extra steps on what you have to setup / know to setup is the problem. For some it will not be a big deal and for others it is extra time being spent to make it happen. Each to their own. Personally, not a big deal for us, but for others I am sure it could be a bit annoying.

I do agree that feature updates should show up as missing even if Syncro can’t push it. This way, it can be reported on easier. You can create saved asset searches to filter to show devices, but you have to know that it is missing in order to do that. Back in our Kaseya days, there was a bad update that was blocked. Turned out, it was necessary for all future updates, so our machines shows 100% patched, when they weren’t. When we switched to CWA, it showed that the subsequent patches were missing, but it couldn’t apply until we applied the blocked patch. When you’re managing hundreds of endpoints, it’s easier to miss something if the info isn’t in your face. IMO, the update should show up, and then where the install button should be, have a ? button and when you hover over it, it gives a short description that it can’t install it, and then links to their update article that goes in more depth on why. Part of this is to manage expectations instead of dealing with complaints.