Hey, when submitting a ticket request through the agent contact form, there is an ‘Attach screenshot’ button. My first assumption (and everyone else’s first assumption based on the way it is incorrectly used by every single one of my clients) would be that by clicking that box you will be prompted to attach a screenshot. This is the way the feature should work.

Instead, by clicking that box, it will automatically take a screenshot of the entire screen when you click ‘Create Ticket’. It’s unlikely that this will contain or will highlight the specific fault, especially as this is not explained to the client. As far as they are concerned, they tick that box, click ‘Create Ticket’ and it’s as if the form didn’t work correctly because it didn’t give them the option to attach the screenshot (several clients have specifically stated this).

This should be changed so that it operates like any other attachment button on a form, it should allow you to select the file that you would like to attach.

At the very least I would like the option to completely remove this ‘Attach screenshot’ button from my contact form as it is misleading, unhelpful, and does not provide the expected outcome. 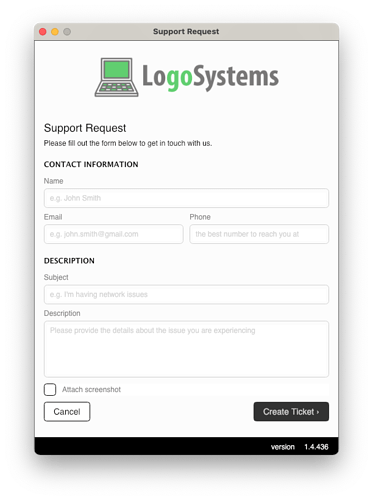 I agree this option is confusing and I had made a request over a year ago that this should be changed. You may want to update your subject, “Attach Ticket” should be “Attach Screenshot”.

At the very least, one would think that when you click attach screenshot, it takes the screenshot then, not at the time you hit the button to open the ticket and there would be a confirmation that it took one. This form needs a few improvements, like the ability to add any attachment, add more fields, etc.

Ah good point, although it doesn’t look like there is a way to edit the Subject

@Andy any chance of just a comment from Syncro on this?

We could rename it I suppose if the label there is confusing folks, but this is used regularly so I don’t think we’d be removing it.

Well, I’m sure it is used regularly, but do you actually have any data to prove that it’s doing what people want it to do or think it will do when they use it? Many of my clients click it and use it regularly, but it is absolutely not doing what they expect it to do. They use it regularly because they click it assuming they can then attach a screenshot, but the current functionality is not even close to what people want it for. Unless you actually have data that proves me wrong and shows that people want the specific existing functionality of secretly taking a screenshot of your whole screen without you knowing about it, then fair enough, but I very highly doubt it. People want to be able to attach a screenshot, like every single other ‘Attach Screenshot’ button on the planet, not a sneaky screenshot of your screen that you don’t even know is being taken, when it’s being taken, or what it looks like once it’s been taken and sent off. It’s just common sense that this is a very dangerous, poorly-worded, poorly-thought out implementation of a core feature that all other ticket submission systems have gotten right.

We talked to users when we built the feature, as we do with most features. Regardless, I understand what you’re after now. You’re looking for the ability to physically attach a screenshot to the Agent Contact Form. We appreciate the feedback/request!

That is definitely the key part of my feature request yes, but you must also be able to see the major faults behind the current setup as well? Nothing about the way it is worded says that a screenshot will be taken of your entire screen once you click ‘Create Ticket’, that’s just not how it’s done on any system anywhere else, so no one would expect that to be the behaviour here either, especially without some kind of warning. It’s a misleading tickbox and I think it invites a massive security issue. People will (and do, I have the evidence of it) send full screenshots to me without knowing it, and I will see confidential information that they didn’t want to share, because the system doesn’t work in the way that it does in any other situation, and the wording is not at all clear which exasperates that problem.

Yep, I completely understand what you are saying here, along with how it might confuse some customers and lead to situations you are describing.

My end users appreciate the current functionality. We’ve never had any confusion on the purpose of the checkbox, even after swapping from a different PSA/RMM. Its a lot quicker than manually taking a screengrab and attaching it to the form. On our end the verbiage seems to be: “Include an image of my screen” which seems pretty clear cut.

Are you saying that the box actually says ‘include an image of my screen’? Because if so that is not what it says in the Mac agent and that would be a clearer statement. I don’t know about PCs but this is just not how Macs or Mac users operate.